For Moore, it's personal. Moore's granddaughter, Sarah has had three heart operations and when she learned she had earned a Good Samaritan Bonus check in June, it was clear who her check was going to be awarded to.

The Children's Heart Foundation relies on the support of individuals, corporations and foundations to fund vital, life-saving research. Donors have funded more than $6.1 million in research specifically targeting congenital heart defects since its inception in 1996.

CHF was founded in memory of Sam Peterson, an 8-year-old who died from multiple organ failure brought on by a sudden heart-related collapse. Betsy and Steve Peterson, Sam's parents, responded to his death by creating CHF in Illinois in June of 1996.

"I just wanted to give back, because when my granddaughter had all those surgeries we paid almost nothing and it fills awesome to be able to give back after what has been given to us," Moore said.

Moore's granddaughter had operations at six weeks old, six months old and at age three. Moore said her ultimate dream is to start a heart foundation in honor of her granddaughter and name it Sarah's Heart. Moore said she would raise funds that would go to families to replace lost income because of heart procedures for their children. Moore said her family was able to stay at the hospital with her granddaughter during her operations, but she saw many families that could not be there around the clock. She said being able to replace an entire person's income would allow them to stay with their child at the hospital.

Moore said the GSB program was amazing because it allowed members of The Alliance to give back to any charity they wanted to support.

"I feel most families don't have what we have here at The Alliance," Moore said. "Wow! Where else can you go to work and have so much fun? We are able to make money helping people and then give money away to our favorite charity. From the bottom of my heart, it feels so awesome to be able to give. I have always wished that I could give away thousands and now I know I have the ability to do that. All I have to do is work." 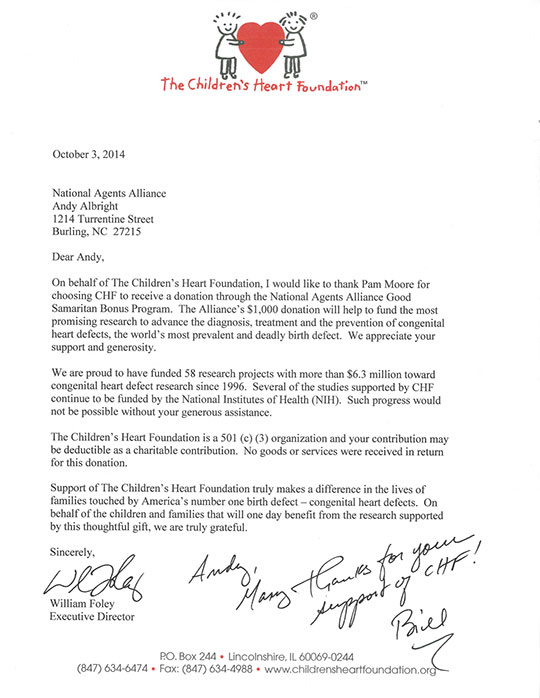